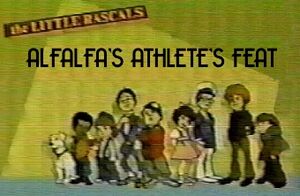 Alfalfa's Athlete's Feat is an episode of The Little Rascals. It first aired: 13 November 1982.

Butch challenges Alfalfa in a pentathlon at the Junior Olympics. Butch tries every effort to get Alfalfa off course and cheat to win. On one attempt, Alfalfa loses his shorts in a bush, and ends up wearing the bush instead, but the bush has poison ivy. Alfalfa tries the pole vault, but due to Butch's mischief, his pole gets stuck, trapping Alfalfa in mid-air. On Butch's last-ditch attempt, Alfalfa is stuck in a tar pit, having lost his shoes. Alfalfa proves to be the stronger person by running the last leg of the race barefoot, while Butch tries to beat Alfalfa by wearing a backpack with a helicopter blade attached to it, causing him to fly past the finish line in hopes of winning. Alfalfa wins the first place ribbon along with tickets to a sporting event. Darla expects a kiss from Alfalfa, but Alfalfa places his ribbon on her lips, angering her for a moment, but Alfalfa was joking, and he and Spanky kiss her numerous times and Darla laughs.