Atom Ant is a character in The Atom Ant Show. He was voiced by Howard Morris and then by Don Messick.

Atom Ant operated out of an anthill in the countryside, where he possessed such things as a mainframe computer and exercise equipment.

His powers mostly consisted of the ability to fly, superspeed, incredible strength, and invulnerability. His catchphrase was "Up and at 'em, Atom Ant!"

He was often contacted by the police, who sent him out on assignments. Some of these missions parodied those of Batman. In one episode, the police force was shown to be underfunded and inept, as they relied on Atom Ant to do all their police work. The only two police officers were the chief and deputy chief. The department only possessed one rusted patrol car. Atom Ant fights various bad guy including recurring ones like Ferocious Flea (voiced by Don Messick) and mad scientist Professor Von Gimmick.

Finalized in the credits of Scoob! 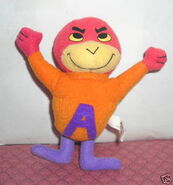 Retrieved from "https://hanna-barbera.fandom.com/wiki/Atom_Ant?oldid=52143"
Community content is available under CC-BY-SA unless otherwise noted.