The topic of this page has a wiki of its own: Augie Doggie and Doggie Daddy Wiki. 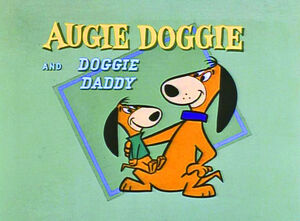 The segments centered around the misadventures of a dachshund father-and-son team. Doggie Daddy (voiced by Doug Young impersonating Jimmy Durante) tried to do the best he could at raising his rambunctious son Augie (voiced by Daws Butler). Augie Doggie, who loved his father, would often refer to him as "dear old Dad." Their mutual admiration included Daddy gently chiding, "Augie, my son, my son", when he would disappoint his father; and when his son would say or do something that inspired pride, Daddy would turn to the audience and say with a grin, "Dat's my boy who said dat!"

Augie Doggie and Doggie Daddy were animated by famous animator Al Bertino, best known for his work for Disney. The character Augie was named after Bertino's son Augustine Bertino. The segments and characters were similar to the Spike and Tyke cartoons William Hanna and Joseph Barbera produced during their theatrical animation careers at MGM in the 1940s and 1950s.

A strict smooth-talking parent. Doggie Daddy does everything to judge what's best for them which can be too much to Augie's displeasure sometimes. Despite his strictness, he has a warm personality and would ultimately agree to his son's wishes.

A highly spirited pup who's motivated by his desire to fulfill his ambitions as well as making his father proud. Possessing some knowledge in science and the ability to converse with animals, Augie would often capitalize if his father's attempts in tasks are in vain.