Hanna-Barbera Wiki
Register
Don't have an account?
Sign In
Advertisement
in: Characters, The Flintstones, Humans,
and 4 more 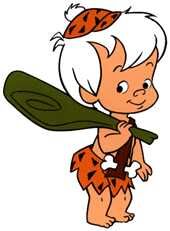 Bamm-Bamm Rubble is a main character in The Flintstones and the adopted son of fictitious characters Barney and Betty Rubble. He is most famous in his infant form on the animated series The Flintstones, but has also appeared at various other ages, including as a teenager on the early 1970s spinoff The Pebbles and Bamm-Bamm Show and as an adult in three made-for-television movies.

Bamm-Bamm lived in the fictional prehistoric city of Bedrock, a world where dinosaurs coexisted with barefoot cavepeople. The cavepeople enjoyed "primitive" versions of modern conveniences such as telephones, automobiles and washing machines, often utilizing the prehistoric animals.

Bamm-Bamm was adopted by Barney and Betty Rubble. After meeting his next-door neighbor Pebbles, the two became lifelong playmates. Bamm-Bamm was named by the orphanage, who left a note with his name in the basket, causing Barney and Betty confusion over the strange name. This was explained when Bamm-Bamm yelled the phrase "bamm, bamm!" and swung his club (and in the process, shook the room he was in). Bamm-Bamm's excessive (and sometimes misused) strength was often a source of humor in the episodes the toddler version of Bamm-Bamm appeared in. Unlike Pebbles, Bamm-Bamm was past the crawling stage and could be seen in a few episodes trying to help Pebbles walk.

Years later, as a teenager, Bamm-Bamm attended Bedrock High School along with Pebbles and their friends, Wiggy, Penny, and Moonrock. In this version Bamm-Bamm's super strength was not actively mentioned and was only shown on occasion. He became more passive and sensible in his manner and tended to be dominated by Pebbles' more aggressive personality. He also was the owner of a "cave buggy," a prehistoric version of a dune buggy.

As an adult, Bamm-Bamm became a mechanic, fell in love with and married Pebbles. The two soon moved to Hollyrock (a fictional prehistoric version of Hollywood, California) so Bamm-Bamm could pursue his true goal of becoming a screenwriter. Later the couple had twins, Roxy and Chip.

In the 1994 live-action Flintstones movie, Bamm-Bamm was adopted by the Rubbles and was seen with long brown hair and wearing only a leaf loincloth. He was mentioned to have been raised by wild mastodons, a parody of various examples of interspecies adoption. Bamm-Bamm soon started to look like his cartoon counterpart after a bath, a haircut, and some new clothes. Bamm-Bamm was played by twins Hlynur Sigurðsson and Marinó Sigurðsson and voiced by actress E.G. Daily (who returned to the role of Bamm-Bamm in a Pebbles cereal commercial).