Benjamin "Benny" T. Ball is TC's right-hand man; he is a short, innocent, chubby, naive and cute blue-colored cat with a white jacket, which fastens with a single button at his neck. Unlike the other cats, his eyes are shown as little black pupils, a characteristic similar to Elroy Jetson.

Benny may appear to be simple-minded (due to the fact that he always gives the game away), but he manages to ask the most logical questions during the gang's erratic endeavors. He is also shown to have a ready wit at times. The gang relationship between Benny and TC is based on a devoted friendship between them.

In Top Cat: the Movie, he appears to be a big fan of Lazlo-Lazlo, a famous musician performer, and he sometimes gets Top Cat and his gang in trouble, usually without meaning to do so. A number of episodes have focused on Benny, including "The Violin Player", "The Unscratchables" and "The Missing Heir". 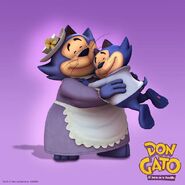