Cattanooga Cats is an animated television series produced by Hanna-Barbera for ABC. It aired from 6 September 1969 until 4 September 1971.

The show was a package program in the vein of the Hanna-Barbera/NBC show The Banana Splits Adventure Hour, except that it contained no live-action segments. During the 1969-1970 season, Cattanooga Cats ran one hour on Saturdays and contained four segments. During the 1970-1971 season, when it aired on Sunday mornings, the segments It's the Wolf! and Motormouse and Autocat were spun off into their own half-hour show; Around the World in 79 Days remained a part of Cattanoga Cats, which was reduced to a half-hour. Motormouse and Autocat ran concurrently with Cattanooga Cats until both met their demise at the end of the 1970-1971 season.

Cattanooga Cats depicts the adventures of a fictitious rock band, similar to the Archies and the Banana Splits, populated by anthropomorphic hillbilly cats:

A fifth member, a mouse keyboardist named "Cheesie", was storyboarded but cut out of the series. Travelling around the country in a converted bus known as Gashopper, they were perennially chased by a female cat groupie named Chessie the "Autograph Hound" (also voiced by Julie Bennett), who, as her name indicated, would stop at nothing to obtain their autographs despite their many efforts to avoid her. Kitty Jo also owned a big blue dog named "Teeny Tim" (appearing only in the videos and comedy "bumpers"). The singing vocals for the Cattanooga Cats were performed by Michael Lloyd and Peggy Clinger.

Only nine cartoon story segments featuring the Cats were produced:

Starting with the tenth broadcast, a second music video and additional comic shorts were added in lieu of a more conventional episode for the remainder of the series.

Around the World in 79 Days

Loosely based upon the classic novel Around the World in Eighty Days by Jules Verne, this was an adventure segment involving balloonist "Phinny Fogg" a.k.a. Phileas Fogg Jr. (conceived as the son of the main character Phileas Fogg in the novel and voiced by Bruce Watson) and his friends, teenage reporters Jenny (voiced by Janet Waldo) and Happy (voiced by Don Messick), who set out on a globetrotting adventure in his father's hot air balloon to sail around the world in 79 days and beat the original record set by Phinny's father by one day. The trio are in competition for both the world record and a million-dollar prize against the sinister Crumden (voiced by Daws Butler), who supposedly was the butler of the original Phineas. Crumden was aided by Phineas' chauffeur, the idiotic and appropriately named Bumbler (voiced by Allan Melvin), and Crumden's sneaky pet monkey, Smirky (voiced by Don Messick). Unlike the other segments, Around the World in 79 Days was a serial with a continuing story. However, as with many shows made during this period, it has no specific ending. This was the longest of the segments. 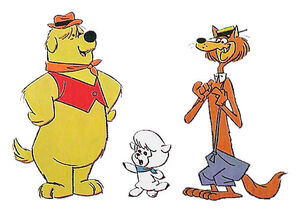 It's the Wolf! followed the comic exploits of a sneaky, smart alec wolf named Mildew (voiced by an uncredited yet easily recognizable Paul Lynde), who aspires to catch and eat a sure-footed little lamb named Lambsy Divy (voiced by Daws Butler), but is always thwarted in this plan by the clever dog Bristlehound, Lambsy's bodyguard (voiced by Allan Melvin). Bristlehound would chase and apprehend Mildew (usually after hearing Lambsy's cries of, "Help! It's the wool-uff!"), pound him, and toss him sailing over the hills with his shepherd's crook, with Mildew screaming a phrase such as "Spoil Sport!" "Sheep Dog Brutality!" or "Bow-Wow Buffoon!" as he flies over the mountains and into the horizon and lands with a loud thud.

Showing modest responsibility, Lambsy never fails to recognize Mildew. He often pretends not to know him at first and gives several rhyming guesses as to who he is before saying "Uh uh, I know who it is!" and giving his signature cry for help. 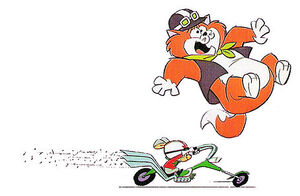 Motormouse and Autocat involved the antics of a fast-talking race car-driving cat and a motorcycle-driving mouse. Much of the segment's appeal lay in the bizarre cars that Autocat (voiced by Marty Ingels) devised in his attempts to catch Motormouse (voiced by Dick Curtis), and in the pleasing and unusual character voices and dialect. For example, Motormouse would often over-enunciate words, saying things like "Chi-co-ry," "That's Plumb Dumb," and greeting Autocat with a friendly "Hey there, Au-to-cat!" Autocat was fond of saying 'Tally Ho-Ho-Ho!'

Cattanooga Cats in other languages

Hanna-Barbera had high hopes for Cattanooga Cats to be a hit program, like The Banana Splits, but the show failed to attract a large audience (and ratings) during its original run. Mildew Wolf, the most popular character on the program, resurfaced in his own right six years after the cancellation of Cattanooga Cats as co-host, with Snagglepuss, on Laff-a-Lympics, this time voiced by John Stephenson.

Lambsy appeared in his own right in Yogi's Ark Lark.

Reruns of Cattanooga Cats did not rerun until the program began airing as part of the Sunday-morning Boomerang programming block on the Cartoon Network, which later became a spin-off network of its own. For several months, the UK Boomerang channel ran the musical interludes from the show, all of which ran to exactly 1 minute 45 seconds, as short (and unidentified) fillers before closing down at midnight. When the channel expanded to 24 hours, these interludes were dropped. The complete show has not been seen in the United Kingdom in recent years.

As the original Cattanooga Cats album was copyrighted under the pre-1975 Copyright Act, the original copyright thereof by Modern Records was allowed to lapse in 1997 without any forethought on the part of the Mike Curb organisation, as owned Modern Records, to renew the copyrights thereof, although Hanna-Barbera retained copyright to the show's name, characters and related aspects.

Revival of interest in the show and its songs, thanks to Boomerang, led some fans to exploit the ensuing copyright vacuum to release pirate MP3 recordings of tracks from the original vinyl album online, and at least one online music seller to offer a pirate CD of the album, not to mention MP3 downloads of the album and tracks therefrom (howbeit recorded off the vinyl album) starting in the mid-2000s. Nonetheless, the Mike Curb estate (Curb died in the summer of 2014) still has the master tapes to the Cattanooga Cats album, and remains reluctant to digitally remaster same for possible CD or MP3 release, or sell the rights thereof to Warner Bros. Music in behalf of Hanna-Barbera.

Trivia about songs on the Cattanooga Cats album 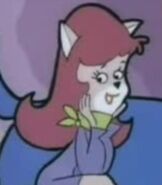 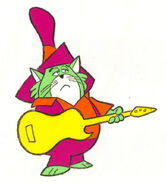 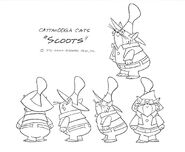 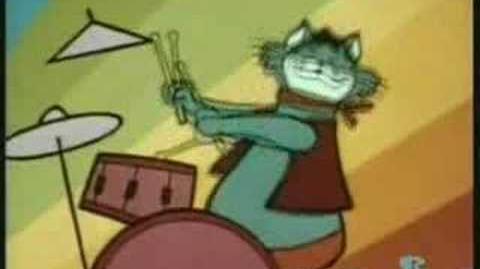 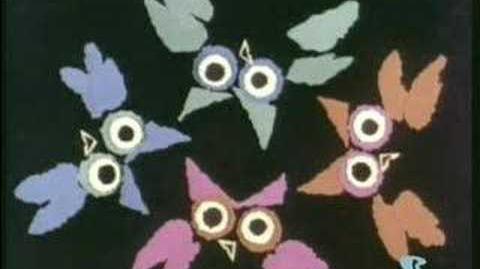 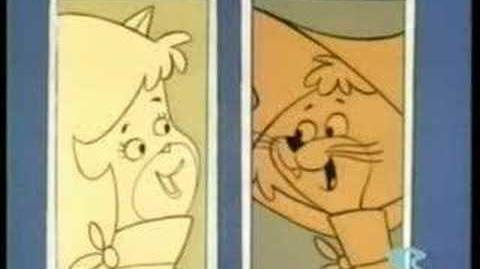 Cattanooga Cats - "Pretty As A Picture" 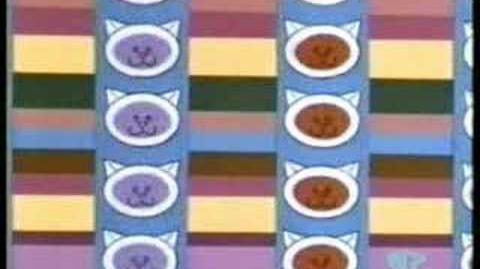 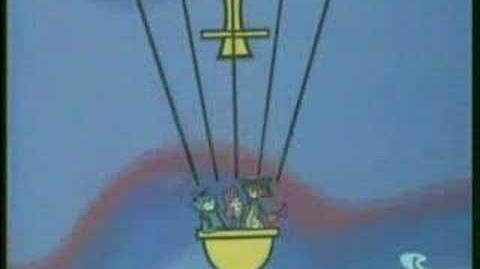 Cattanooga Cats - "How Did I Ever Get So Lucky?" 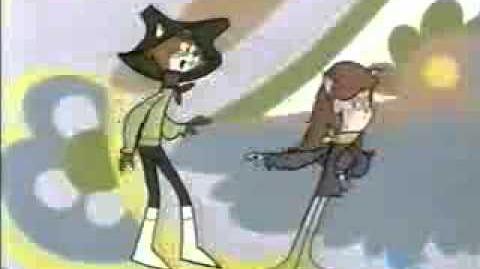 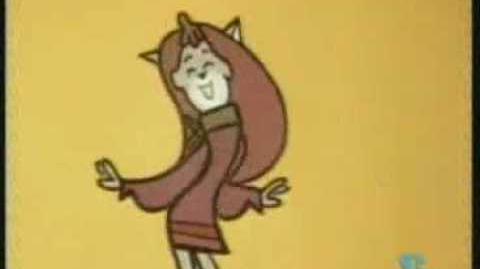 Cattanooga Cats - "Give Your Love To Me" 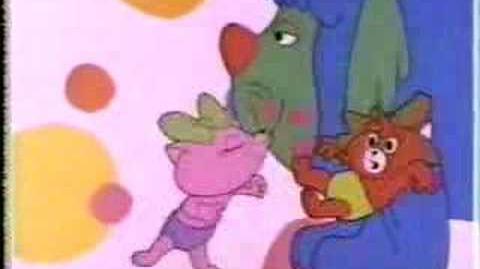