Dick Dastardly (Full Name Richard Milhous Dastardly) is one of Hanna-Barbera's most recognized villains, known for his evil laugh and famous catchphrase: "Drat, Drat and Double Drat!" and occasionally "Triple Drat!" he is voiced by original Paul Winchell and later Jim Cummings impersonating Jack Lemmon on the movies Disney's Winnie the Pooh. He is the main antagonist in the 2020 CGI animated film Scoob! voiced by Jason Isaacs.

A perpetual cheater and greedy schemer, Dastardly is always paired with sidekick Muttley. He debuted as the villain of Wacky Races, where his vehicle was the Mean Machine (Double Zero). He often resorted to many despicable tricks to win each race, but his schemes always backfired. In the debut episode, Dastardly lands in fourth place as he was seen taking a pose with his hat off when it shows in replay until the next episodes, he ends up being disqualified in first place and always in last place.

He later appeared in Dastardly & Muttley in Their Flying Machines, where Dastardly and Muttley led the Vulture Squadron with two other pilots: Zilly, a coward who used to hide in his clothes when he was ordered to deploy, and Klunk, the mechanic/inventor, who speaks a language composed of strange sounds that only Zilly can understand. The squadron constantly attempt to stop a messenger pigeon, Yankee Doodle Pigeon, from delivering messages to an opposing army.

The 1970s TV series Laff-a-Lympics had a near-clone of Dastardly named Dread Baron, voiced by John Stephenson. In fact, the similarity caused the translators in Brazil to mistake him for Dastardly. In this series, the Dread Baron was seen wearing a World War I-era German fighter pilot's uniform. The Dread Baron accompanied Mumbly, a dog that was very similar to Muttley, only with grey fur and an orange trenchcoat. Mumbly actually had his own series in which he was a detective, and in a role reversal, Mumbly acted as the team captain of the Really Rottens in Laff-a-Lympics, with the Dread Baron and others serving as team members.

In later years, Dastardly and Muttley were the nemeses for Yogi Bear and his friends in the 1980s series Yogi's Treasure Hunt. This time, Dick repeatedly failed at discovering hidden treasure before Yogi and his team. It was in this series' episode "Yogi's Heroes" that Dick's full name was revealed; as the leader of an island nation named Dicaragua, he introduced himself as Richard Milhous Dastardly (an obvious play on former U.S. President Richard Nixon). Another episode, "The Greed Monster", shows that Dastardly and Muttley are the greediest creatures in the world.

Dick Dastardly and Muttley were in the "Fender Bender 500" shorts on the early 1990s short-lived series Wake, Rattle & Roll. In those segments, the duo once again appeared in a souped-up version of the Mean Machine as a monster truck called the Dirty Truckster (a pun on their phrase "dirty trickster"), but raced against such Hanna-Barbera stalwarts as Yogi Bear and Quick Draw McGraw. In one episode (the "Russian Around 500"), they were actually able to pull off a win when racing to Moscow's Red Square. Unfortunately, the prize was simply a red square of paper, and not the property deed to the Russian capitol as the title of 'red square' would imply. In another Fender Bender race (the "Hit 'n' Mississippi 500"), he plays on Yogi Bear's famous catchphrase of being "smarter than the average bear" by claiming to be "smarter than the average cheat".

Dick Dastardly (alongside Muttley) appeared as a teenager (known as Dickie) in the short-lived series Yo Yogi!, voiced by Rob Paulsen. In this series, he rides a bicycle that resembles the Mean Machine, and his outfit resembles that from Dastardly & Muttley in Their Flying Machines. 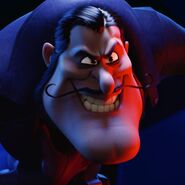