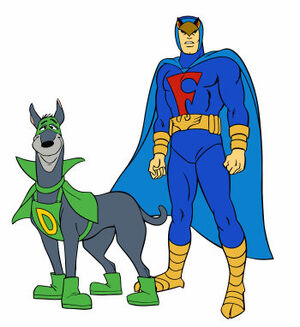 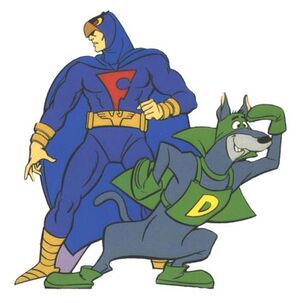 Dynomutt Dog Wonder was produced by Hanna-Barbera for ABC in 1976, as part of The Scooby-Doo Dynomutt Hour. The main characters are Dynomutt, a mechanical dog superhero, and Blue Falcon, his human master. Scooby-Doo and his friends sometimes interacted with Dynomutt and Blue Falcon as they fought crime.

Created by Joe Ruby and Ken Spears, these half-hour exploits of animated derring-do concern the Blue Falcon (voiced by Laugh-In alumnus Gary Owens), a blue-caped and -cowled superhero, and his robotic doberman, Dynomutt (voiced by Frank Welker, in a manner that somewhat recalled Bullwinkle J. Moose), much like Batman and Robin, but with a more comical twist.

Millionaire socialite art dealer Radley Crown, a Bruce Wayne imitation, and his mechanical pet enjoy leisure time in their base of operations, Big City, until alerted by the Falcon Flash. They immediately dash for the Falcon's Lair, situated in Crown's penthouse apartment, where they switch to their secret identities, receive the report via TV screen from the secret general headquarters of secret agent Focus One (voiced by Ron Feinberg, the tongue-in-cheek narrator of all twenty segments of Dynomutt Dog Wonder), and jump into the Falconcar and speed into the fray against assorted evildoers. Much like the 1960s Batman TV series, the first ten minutes of Dynomutt ended with a cliffhanger wherein The Daring Duo, in the clutches of their foes, were subjected to a perilous fate which would be resolved immediately after the commercial.

An asterisk (*) indicates a crossover appearance by Scooby-Doo and his friends.

All second-season episodes were produced as two-part stories as part of Scooby's All-Star Laff-a-Lympics.

References in Other Shows

Wikipedia has an article related to:
Dynomutt Dog Wonder