Frankenstein Jr. and the Impossibles

Frankenstein Jr. and the Impossibles is one of the Hanna-Barbera superhero shows. Unlike the others, it was not done by Alex Toth; rather, it was done in the style of The Flintstones and The Jetsons. Also, like the later Moby Dick and Mighty Mightor, the latter's segments came first and third, while the former's was in the middle. 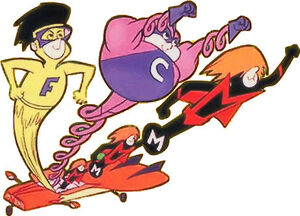 The Impossibles are a trio of superheroes posing as a rock band. Whenever their boss, Big D, called them to give them their mission, they would instantly become superheroes: Coil Man, whose arms and legs are coils; Fluid Man, who can turn into water; and Multi Man, who can create a large amounts of copies of himself. 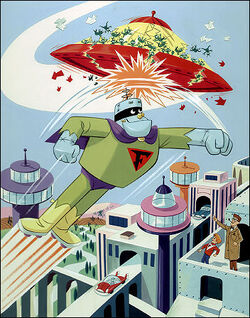 Frankenstein Jr. is the creation of Buzz Conroy Jr. and his father, Dr. Conroy. Whenever a supervillain or alien invaders attacked the Earth, Buzz would summon his thirty foot robot with his special ring, and together, they would beat the villains.

Besides being built with numerous gadgets, Frankenstein Jr. also has super strength and the power to fly.