Grape Ape is a Hanna-Barbera character. He was voiced by Bob Holt.

He is a forty-foot-tall purple gorilla. His catch phrase is saying his name twice ("Grape Ape, Grape Ape") after anything anyone says, usually as a form of agreement or acknowledgement of what was said.

His best friend is a dog named Beegle Beagle (voiced by Marty Ingels). On Scooby's All-Star Laff-a-Lympics, Grape Ape was a member of Yogi Bear's team, the Yogi Yahooeys. His "birthday" is May 19.

He appears in Jellystone! in where he is portrayed as a kaiju. 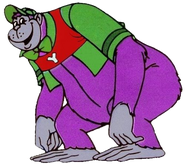 Grape Ape in the credits of "Scoob!"
Community content is available under CC-BY-SA unless otherwise noted.
Advertisement