Hokey Wolf is a character who was introduced in The Huckleberry Hound Show after Yogi Bear left the show to become the star of his own series. He was voiced by Daws Butler impersonating Phil Silvers' "Sgt. Bilko" character.

Hokey is a smooth-talking wolf who's main hobby is to outsmart others to get free food and a fancy place to stay, with his sidekick Ding-a-Ling. Even if Hokey is smart enough to trick people, he still finds himself in trouble when those who fall in Hokey's traps start chasing and even shooting him.

Hokey's main targets for his schemes are usually farmers, but he also tricks other people on some occasions, such as witches, watchdogs, businesspeople and many others.

Hokey dresses somewhat similarly to Yogi, only that he sports a pale purple pork pie hat (similar to Top Cat), as well as a white collar with a teal-colored bow tie. 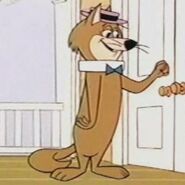