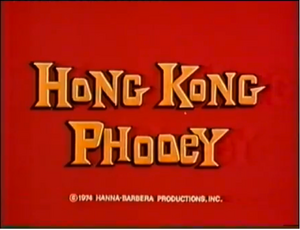 Hong Kong Phooey was produced by Hanna-Barbera in 1974 for ABC, as a response to the martial arts fad of the time. Sixteen half-hour episodes were produced, all but the last consisting of two stories each. The series finale was a backdoor pilot for the Posse Impossible segment of CB Bears.

Hong Kong Phooey is a masked canine hero (voice of Scatman Crothers) who fights crime by using his martial arts skills and his shape-changing Phooeymobile. His feline partner, Spot, does most of the work but gets little credit.

The hero's secret identity is that of Penrod "Penry" Pooch, a police janitor in an unnamed city. Penry works with Sgt. Flint and police dispatcher Rosemary. Penry the hero believes in kung fu powers which he thinks enable him to capture the bad guys, but Spot actually makes it happen.

His "experience", more often than not, seems to come from a correspondence course, as he is continually consulting his martial arts handbook for advice.