The topic of this page has a wiki of its own: Huckleberry Hound Wiki.

Huck is a blue dog that speaks with a Southern drawl and has a relaxed personality. His shorts are usually put in one of two formats. In some episodes, he tries to perform jobs in different fields, ranging from policeman to dogcatcher, with results that backfire, yet usually comes out on top, either through slow persistence or sheer luck. Huck did not seem to exist in a specific time period as he has also been a Roman gladiator, a Medieval knight, and a rocket scientist. In other episodes he's an actor, or vaudeville performer, known for his dancing and singing. He lives in the city of Hill Street Neighborhood (known as the city of music), which is known for the the most famous store in the world, Maple Mall. He's also known for chasing the ice cream truck, whenever he sees, or hears it.

One regular antagonist is Powerful Pierre, a tall and muscular unshaven character with a French accent. Other regular villains are Dinky Dalton, a rough and tough western outlaw that Huck usually has to capture, and Crazy Coyote, an Indian who Huck often had to defeat who was his match. There were also two crows with Mafia accents who often annoyed Farmer Huck.

A trademark of Huck is his tone deaf and off-key rendition of "Oh My Darling, Clementine", often used as a running gag. However in the short "Legion Bound Hound", it is also the name of his ex-fiancée, whom he tries to forget. He also commonly uses the phrase "and stuff like that there" in place of "and so on." Other traits include his ability to extend his body (including his tail), his strategy of winning people over by winking his left eye, and his habit of giggling, even at the smallest of things. He also has a secret weapon known as "The Huckleberry Howler," where he takes a deep breath, and lets out the howl of a wolf (or a dog in this case).

While he did appear as a major character in most Hanna-Barbera spin-offs, Huck was put back into the spotlight in the television movie, The Good, the Bad, and Huckleberry Hound, where he was portrayed as a reluctant town sheriff and falls in love with the Native American girl named Desert Flower. This was also Daws Butler's last performance as Huck (and several other of his characters) before his death.

His birthday is January 17. He is said to be one of the last living members of his family, though he has five sisters, four brothers, a grandfather known as "Grampy", and his two-year-old crybaby nephew Hector.[Citation needed] He has three girlfriends: Daisy Crophopper, a yellow hound; Clementine Darling, a pink hound; and Desert Flower, another yellow hound.

Based on the Southern Wolf character in the 1953 Droopy short "Three Little Pups", he was voiced by Daws Butler, who had given a similar voice and characterization to Reddy. Butler denied he based the voice on Carolinian actor Andy Griffith, as well as a neighbor he once knew, and had been using it since the late 1940s. For his part, Joseph Barbera recalls in his memoir, My Life in 'Toons, that when asked to demonstrate a Southern drawl, Butler noted where there were a number of regional variants thereof. Butler kept voicing Huck until his death in 1988, as all of his recordings of Huck were completed prior, and Greg Burson took on the role in 1989.

Huck as a teenager in Yo Yogi! 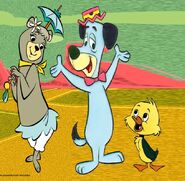 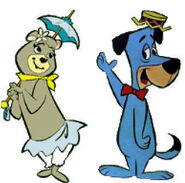 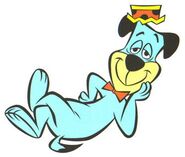 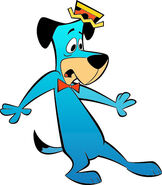 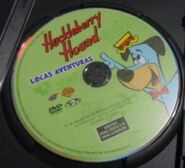 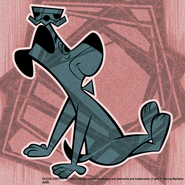 "Just wait till ol' Yogi gets a bang out of this!"

Retrieved from "https://hanna-barbera.fandom.com/wiki/Huckleberry_Hound?oldid=57696"
Community content is available under CC-BY-SA unless otherwise noted.