Josie McCoy is the lead character on Josie and the Pussy Cats. She was voiced by Janet Waldo.

Josie has red hair styled in a short bob and adorned with a blue ribbon. She has black irises.

Her primary wardrobe is a blue long-sleeved loose shirt with white outlines on her collar, dark blue skirt and blue loafers.

In the musical sequences, Josie wears a rock band suit and she plays a guitar. Josie is of average intellect, compared to the genius Valerie and the ditzy Melody.

In Josie and the Pussy Cats in Outer Space, like both Valerie and Melody, Josie wears a golden yellow space suit with an orange sailor collar, matching orange gloves with a brown belt and the pussycat buckle in the center and brown boots. The color of her ribbon is now golden yellow to match her space suit. 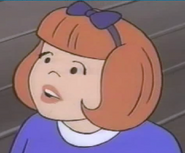 Retrieved from "https://hanna-barbera.fandom.com/wiki/Josie_McCoy?oldid=51742"
Community content is available under CC-BY-SA unless otherwise noted.