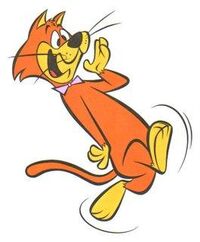 Mr. Jinks is a character in The Huckleberry Hound Show. He is the cat who constantly chases Pixie and Dixie, of whom he routinely said, "I hate meeces to pieces!"

Jinks is an orange cat sporting a blue-colored bow tie.

Though Jinks often chases Pixie and Dixie, he has a soft spot for them, evident in episodes such as "Strong Mouse", "The Pushy Cat" and "Mouse Nappers". In the episode "Jinks Jr.", Jinks doesn't fully understand why he chases them, only that "cats are supposed to hate meeces". Even so, Jinks doesn't usually mean them any real harm, such as in the episode "The Ghost with the Most" when Dixie pretends he is dead after Jinks clobbers him, and Jinks is very remorseful and guilty, even partially traumatized.

In return, Pixie and Dixie care about Jinks deep down as well. Pixie and Dixie mostly have a love-hate relationship with Jinks, where they can both be equally cruel to each other and will retaliate when provoked.