Muttley is Dick Dastardly's canine sidekick. He's a mixed-breed dog, and he first appeared in Wacky Races. Dastardly and Muttley were paired together in various later Hanna-Barbera series, including Yogi's Treasure Hunt, as bumbling villains.

Muttley does not really talk very much; his main examples of speech are his trademark snicker - a wheezing smoker's laugh (usually made at Dick's expense, who sometimes retaliates by thumping him on the head) - and a mushy, sotto voce grumble against an unsympathetic or harsh Dick (usually along the lines of "Sassafrassarassum Rick Rastardly!"). However, he occasionally says intelligible words. Muttley also hates bad remarks about him as seen when Dastardly calls him dumb or an idiot, as he bites his owner's hand or grits him angrily to make his owner calm himself down. And he is also known as mischievous, understanding, thoughtful, treacherous, lovable, empathetic, astute, menacing, upbeat, truthful, testy, loyal, emotional and sneaky.

In Dastardly and Muttley in their Flying Machines, Muttley wears an orange pilot helmet and white goggles along with a matching orange scarf and he was the one who keeps saving Dastardly from falling and he uses his tail to fly like a helicopter for a brief period. Muttley is also a hoarder of medals as he is always asking Dastardly for one for obeying his commands or whenever he tries to save him from falling. If Dastardly didn't have one, he would purposely drop him. If he is given a medal he will give sighs of delight before floating in the air and land back on the ground, though Dastardly would often rip the medals off his chest as a punishment for his incompetence. However Muttley sometimes bites the hand of anyone who tries to take the medals away from him. Muttley also has his own show called Magnificent Muttley where Muttley is a protagonist being taunted by Dastardly who serves as a villain.

Don Messick originally voiced Muttley and even used his distinctive laugh for the character of Griswold in an episode of Top Cat, as well as for another Hanna-Barbera canine, Precious Pupp, several years earlier. He also repurposed it for Alexandra Cabot's cat, Sebastian, on Josie and the Pussy Cats in 1970, and for Mumbly on The Tom & Jerry/Grape Ape/Mumbly Show and Laff-a-Lympics. In more recent years, Billy West is currently the voice of Muttley. Muttley makes an appearance in the CGI film Scoob! as revealed in a leaked image during the film's reveal at Comi-Con. He is once again voiced by Billy West and his archival snickering is provided by the late Don Messick.

Muttley is mentioned in Jellystone! as the first person that Loopy de Loop kissed.

Dastardly and Muttley in Their Flying Machines 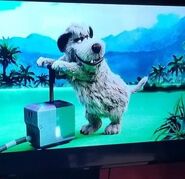