Penelope Pitstop is a character created by Hanna-Barbera, who debuted in Wacky Races and later spun off into her own series, The Perils of Penelope Pitstop.

In Wacky Races, Penelope has long blond hair in a full fringe. She wears a purple racer helmet with goggles. She also wears a dark pink rider jacket with a purple turtleneck and purple gloves, pink skirt with red pants underneath and white boots.

In The Perils of Penelope Pitstop, Penelope's eyes resemble those of Daphne Blake, and despite having white sclerae, she wears red lipstick. Her helmet is replaced by a magenta pilot helmet with matching white goggles. She now wears a hot pink long-sleeved jacket with a matching belt and long magenta scarf, which is hanging loose on the right side. Even though she still wears her red pants and white boots from the Wacky Races, her gloves are now white.

In "Cross Country Double Cross", Penelope's blond hair is loose as she uses her helmet to block the hose which the Hooded Claw used to flood the train car.

Penelope Pitstop was the only female driver on Wacky Races. She drove car #5: the Compact Pussycat, which was essentially a beauty salon on wheels. Iwao Takamoto said in an interview that he and Jerry Eisenberg created her as an afterthought, as Joseph Barbera had suggested that a woman be included in the Wacky Races cast.

Aside from Dick Dastardly, the male racers are very chivalrous toward her, and rarely attack her car, sometimes even allowing her to pass them. The Turbo Terrific driver, Peter Perfect, is particularly fond of her, frequently calling her "Pretty Penny".

In her own series, The Perils of Penelope Pitstop, she had become a jet-setting heiress in 1912. The Ant Hill Mob had become Penelope's bodyguards, protecting her from The Hooded Claw and his twin henchmen, The Bully Brothers.

Penelope Pitstop is referenced in the 2020 CGI animated film Scoob! with a perfume called Pitstop from "Penelope" and a Penelope Pitstop arcade cabinet in the abandoned Funland amusement park in Romania. In the credits, an image of Penelope Pitstop riding on the Compact Pussycat appears in Dastardly's cell wall before Muttley busts him out of prison. Penelope was supposed to appear in the film as revealed in a pink poster for the film, but she was scrapped from the film. 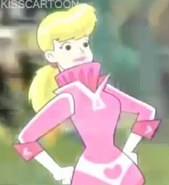 Penelope in a sack on a pulley, thanks to the Hooded Claw.