Quick Draw is a white horse with black hair, a peach muzzle and grey hooves. His main attire is a red cowboy hat, a blue bandana and a red gun belt with holster. He would also occasionally wear spurs.

He is a well-intentioned, but somewhat dim sheriff of a non-specified town set in the Old West in his own shorts.

His famous catchphrases are "Now hold on there!" and "I'll do the 'thin'in' around here and don't you forget it!" Also if he got hurt he would often say "Ooooh that smarts!" One of the main running gags was him accidently shooting himself with his own six shooter.

Quick Draw was often accompanied by his deputy, a Mexican burro, Baba Looey (also voiced by Butler), who spoke with a Mexican accent

Another character featured in Quick Draw's series of shorts was Snuffles, the bloodhound dog who would point to his mouth when he wanted a dog biscuit, then hug himself, leap up in the air, and float back down after having eaten one. In several cases when Quick Draw did not have a dog biscuit to offer, or if he tried to give Snuffles the reward cash for capturing an outlaw, Snuffles would either shake his head and say, "Uh-uh," or grunt to himself and mumble "Darn cheapskate!" and then throw the money back in Quick Draw's face. (between the trapper Rawhide Clyde and his mangy hound Bristletooth, only beef jerky was used instead of dog biscuits.) In his first appearance, "Bow-Wow Bandit", he was trying to find Quick Draw's assistant Baba Looey, who was kidnapped by a bandit that thinks that he has a tattoo of a map on his back. When he wasn't called Snuffles, Quick Draw sometimes called him dog deputy. (A similar gag was deployed on the "Crazy Claws" segment of The Kwicky Koala Show

One of Quick Draw's main enemies was his evil double Horseface Harry who was a dangerous outlaw and often got Quick Draw in trouble.

In Jellystone!, Quick Draw's character has been fully absorbed into the character of El Kabong, now a Latino vigilante.[1] He also works as a teacher rather than being a sheriff.[2]

In certain cases, Quick Draw would also assume the identity of the masked vigilante El Kabong (a spoof of Zorro).

As "El Kabong", Quick Draw would attack his foes by swooping down on a rope with the war cry "Ole!" and hitting them on the head with an acoustic guitar (after shouting "kabong!") which is always referred to as a "kabonger", producing a distinctive kabong sound and usually destroying the guitar in the process.

Quick Draw appeared in 45 shorts of his segment of the show: 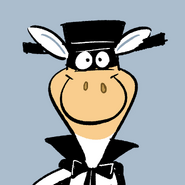