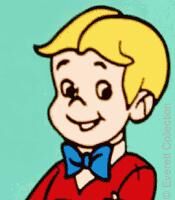 Richie Rich is a Saturday-morning cartoon series, produced by Hanna-Barbera for ABC, from 1980 to 1984. It is based on the fictional character who appeared in Harvey Comics from 1956 until 1994. Beginning in January 1986, rebroadcasts of the series started airing on CBS, replacing CBS Storybreak. Richie's CBS run was believed to have lasted only one month. Hanna-Barbera's character designs for Richie Rich differed significantly from the comics.

Most of the titles listed below were also used in then-recently published Richie Rich comic stories, but the television versions used a different storyline than in the comic book series. For example, "Sky Hook" was originally published in a 1981 issue of Richie Rich and Cadbury, but the 1982 cartoon version didn't feature Cadbury. "Whale of a Tale" was featured in an issue of Richie Rich Digest Stories in late 1981, but the cartoon version featured Gloria Glad, while the comic book story used Cadbury.

By the early 1990s, some segments were featured in several VHS compilations, which featured the syndicated opening. In April 1995, two VHS releases containing only Zillion Dollar Adventures segments - including all of the season 4 segments except for two, the last two from Season 3, and one from Season 2 - were released: Richie Rich: Priceless Toys and Richie Rich: A Boy's Best Friend.

In May 2008, Volume 1 of The Richie Rich/Scooby-Doo Show was released on DVD by Warner Archive, which contained the first seven episodes from the first season. Currently, there are no plans to release a Volume 2 set, possibly due to lower-than-expected sales.

Each of the three series that Richie Rich appeared in had its own opening.

Version 1, from the first two seasons, had Richie involved in various events, showcasing his wealth and gadgets, including Richie watching Scooby-Doo cartoons on his big screen TV, with Cadbury by his side, and Irona lifting the sofa while Richie and Dollar are sitting on it, while she does her vacuuming task; Richie on skis on top of a hill made of jewels; and Irona playing tennis with Richie. Shaggy Scooby-Doo and Scrappy-Doo then appeared uttering "That's rich!" before a $100,000 banknote depicting Richie's portrait (and the amount of his weekly allowance) zoomed inward before showing the show's title logo one more time. When this intro was aired in the entire syndicated run, the scenes involving Scooby-Doo characters were replaced by various scenes from the Riches segment "The Rare Scare".

Version 2, from Season 3, had a shortened version of the chorus of singers used, as Richie walked through the mansion's hallway, then arrived at one of the vaults to open the safe and observe the wealth. This was the only opening in which Dollar did not appear. 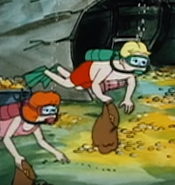 Repeats from Season 1 aired during the latter five episodes of Season 2 on ABC.

In this season, one Richie Rich Gems segment was dropped. This might have been due to being replaced with a 30-second Little Rascals skit, or a sign of declining ratings at this point.

Repeats of Riches, Treasure Chest, and Zillion Dollar Adventures segments were aired during the last five episodes of Season 3. There is no certainty if the 1982 Animators Strike had anything to do with the repeats. Brand new Richie Rich Gems segments were still aired regardless. Here are some of the Gems segments aired on ABC but never aired in syndication:

Only Zillion Dollar Adventures were produced for this season.