Hanna-Barbera Wiki
Register
Don't have an account?
Sign In
Advertisement
in: Article stubs, Characters, Josie and the Pussy Cats,
and 7 more

Sebastian is a character on Josie and the Pussy Cats. He was voiced by Don Messick.

Sebastian is Alexandra Cabot's snickering cat, whose black and white fur resembles Alexandra's hair. He enjoys being mean and sometimes appears to go to the enemy's side, but usually only to trick the villain so he can have a chance to help the group escape. He sometimes uses his claws to pick locks. Alexandra sometimes recruits Sebastian to pull dirty tricks on Josie, but even these tricks usually backfire. He protects Josie's relationship with Alan. 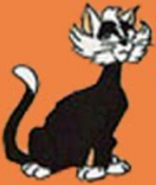