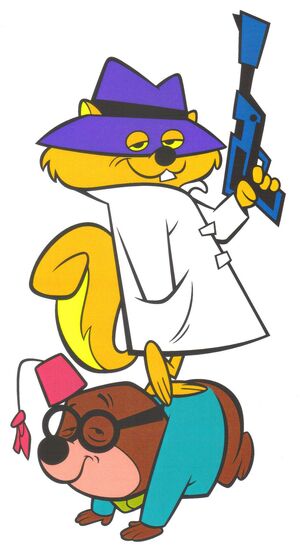 He served as a secret agent (his designation was "Agent 000"), taking orders from his superior, Double-Q. Secret was assisted in his adventures by fez-wearing sidekick, Morocco Mole. The pair fought crime and evil agents using cunning and a variety of spy gadgets, including a machine gun cane, a collection of guns kept inside Secret's coat, and a variety of devices concealed in his hat (which he almost never removed).

Secret Squirrel's recurring arch-enemy is Yellow Pinkie, who is a parody of Auric Goldfinger from Goldfinger and Kasper Gutman from The Maltese Falcon. The last bunch of episodes introduced Hy-Spy, the master of scientific criminology.

The shorts were a parody of the then-popular spy genre, with most of his shorts' elements satirizing those of the James Bond films. In 1994, Secret Squirrel started appearing in new cartoons in between the 2 Stupid Dogs episodes. It was called "Super-Secret Secret Squirrel" which has been voiced by Jess Harnell. A new character in "Super-Secret Secret Squirrel" is a female squirrel named Penny (who has a big crush on Secret). In the episode Queen Bea, Penny became Secret's love interest when she tries to fight Queen Bea for his affections. In the end of the episode, Secret hugs both Penny and Morocco stating that he loves his friends.