Norville "Shaggy" Rogers is Scooby-Doo's master. He was voiced by the late Casey Kasem. Billy West and Scott Innes (who also voiced Scooby for that time) briefly took over the role in several of the direct-to-video films produced in the late 1990s and early 2000s. He is now voiced by Matthew Lillard who played him in the live action movies. He was voiced by Will Forte in the 2020 computer-animated film Scoob!

He is a cowardly slacker more interested in eating than solving mysteries, giving rise to an Urban Legend suggesting that Shaggy is some class of a closet marijuana smoker. Shaggy is the second most-popular character in the franchise after Scooby himself, and is the only other Scooby-Doo character to appear in all iterations of the franchise. The character's given name was not revealed until an early episode of A Pup Named Scooby-Doo. He stands 6 feet 3 inches.

Shaggy's distinct personality is evident in his late-'60's-stylee speech pattern — punctuating his sentences with the word "like", and his appearance—he is lanky, with shaggy dirty blonde hair and a rough goatee (no mustache, though), typically sporting a chartreuse-green T-shirt and brown bell bottoms. In The 13 Ghosts of Scooby Doo and early direct-to-video movies, he wore a red T-shirt and blue bell bottoms.

Both Shaggy and Scooby-Doo are readily bribed with Scooby Snacks due to their nearly insatiable appetites, and have tendencies toward goofing off and cowardice. They justify their constant hunger by saying, "Being in a constant state of terror makes us constantly hungry!"

His favorite dish is "cheese pizza with pickles", as revealed in the TV movie Scooby-Doo! Abracadabra-Doo.

It is mentioned in the second episode of the first season, "A Clue for Scooby-Doo", that Shaggy's desire for bizarre food combinations (chocolate-covered hot dogs, for example) comes from the fact that his first toy as a child was a garbage disposal.

Both his and Scooby's cowardice (as well as their appetites) have become so ingrained in their characters that they are often portrayed as being expert cowards. Both Shaggy and Scooby are adept runners, have become skilled contortionists due to learning to hide in small places, experts at building barricades from various kinds of furniture and other household objects (even designing one to be collapsible just in case they need to use the barricaded door/entrance as an escape route from the monster/villain). They are also experts in what is scary (both Shaggy and Scooby have been shown to use each other's fears in their competitions in stealing one another's food) due to their being craven cowards. In the episode "Camp Comeoniwannascareya" they use this knowledge to help a fellow camp counselor and the campers scare off the camp's greedy owner who wishes to turn the summer camp into a resort for adults and children.

Shaggy, as well as Scooby, has shown to be capable of great feats of athletic ability, his ability to run at times bordering on superhuman, just through fear alone--even being able to run on water or use his feet to move a boat carrying Scooby, the rest of the gang, and Velma's sister Madelyn, across a lake while being chased by a flying monster. These abilities are mainly comical in nature and Shaggy (along with Scooby) appears to be capable of said feats only when in a state of fear/panic. However, in Scooby-Doo! Camp Scare, out of frustration of being trapped, he shakes the iron bars of an old-fashioned jail cell so hard that they collapse.

Casey Kasem, the first voice actor for Shaggy, said that he originally felt discomfort after being assigned to Shaggy. Kasem stated that while he was "hip to what hippies were about," he had never before portrayed a hippie character. Kasem had wanted to portray Fred Jones, while Frank Welker had wanted to portray Shaggy. Instead, the network assigned Kasem to Shaggy and Welker to Fred.[1]

Kasem stated that as he continued to voice Shaggy, the character evolved. Kasem explained that the "voice dynamics" improved and that his laughs increasingly gained quality. Kasem said that Shaggy in 2002 is "more frightened today than he was at the beginning."[1] Too, Kasem's vegetarian habits would eventually carry over into the Shaggy character starting with the second season.

Relatives of Shaggy shown during the series include:

A beautiful blond southern girl who had a crush on Shaggy and wanted to marry him in Scooby-Doo Meets the Boo Brothers. Shaggy was not interested (despite the fact that she was very attractive) and tried his best to escape from her loving clutches. Shaggy, for the most part, thinks that Sadie's a "gooney girl" and avoids her through most of the movie. Shaggy also had to watch out for her gun-toting older brother Billy Bob, who did not approve of his sister's choice.

Shaggy's pretty blond girlfriend in Scooby-Doo and the Reluctant Werewolf. Not much is shown about their relationship aside from the factor that Googie wants him to be more intimate with her. She would warn him of hiccups and didn't appreciate being mocked. Shaggy is not always so attentive to her wants, he prefers mostly to snack and other things. Romance is shown furthest from his mind. But he has shown to be fond of her kisses.

A very beautiful hippie-chick photographer for whom Shaggy falls in Scooby-Doo and the Alien Invaders. Shaggy & Scooby meet her and her golden retriever, named Amber (with whom Scooby falls in love) shortly after being abducted by aliens. At the end of the film, Crystal and Amber prove to be aliens from 20 light years away, and are dressed like they are because their interpretations of the way humans are dressed were derived from 1960s television broadcasts, to which Shaggy says, "Hey, why mess with a classic look?" After Crystal and Amber leave on their ship, Shaggy and Scooby are broken-hearted, but a box of Scooby Snacks does the trick to snap the duo out of their sorrows.

Shaggy's love interest in the first live-action Scooby-Doo film. She is possessed by a demon under the control of Scrappy-Doo late in the movie, but it is expelled. Her name, "Mary Jane", is a pun on the slang term for marijuana. She, like Shaggy, enjoys eating Scooby Snacks.

Velma's little sister. She has had a huge crush on Shaggy since she was younger. Due to her crush on him, Shaggy refers to her as "Doe-eyed Dinkley" and calls her by the nickname "Madds". Madelyn's obvious crush on him has made Shaggy wary of her. She thinks Shaggy is braver and smarter than he actually is. She is Shaggy's love interest in Scooby-Doo! Abracadabra-Doo. Velma is alerted by her mother that the school Madelyn is attending is being terrorized by a griffin. Though indifferent at first, Shaggy eventually discovers that he likes Madelyn in the same way that she likes him. After Madelyn is taken by the griffin, Shaggy shows he is willing to help rescue her without the others convincing him, however in typical Shaggy fashion he comes prepared, donning a suit of medieval armor and carrying the "ancient spear/staff of O'Flannery" that is supposed to grant the user control of the griffin. During a confrontation with the griffin, Shaggy and Scooby are separated from the others. Fred tells them to stay where they are while he, Velma, and Daphne go for help. While waiting for the others to return, Shaggy and Scooby hear Madelyn, who is locked-up nearby, crying for help. At first Shaggy is reluctant to go save her out of fear and cowardice, and suggests to Scooby they should wait for the others, Scooby, disgusted, in serious tone, tells Shaggy, "Rhaggy, Madelyn Rikes you!" Realizing Scooby is right, Shaggy goes off to rescue Madelyn, with Scooby right behind him. Shaggy and Scooby gain entrance to the tower through the O'Flannery's spear, which is actually a key to a door in the tower. Upon entering the room where Madelyn is being held, Madelyn who is watching from afar, sees Shaggy clad in armor and removing his helmet, looking very heroic. While ogling her very own "Knight in Shining Armor", she briefly loses her balance, but quickly recovers that along with her composure. While trying to escape from the griffin, all three end up in its clutches as it flies around the castle. Shaggy tries to get the griffin to stop by throwing the staff at it, but the staff misses and goes up into the sky. However, the griffin soon crashes to the ground. Shaggy, Madelyn and Scooby escape before it crashes. Madelyn proudly states that Shaggy "got" the monster and hugs him. Shaggy congratulates her backstage after performing a magic trick.

Velma Dinkley is Shaggy's official love interest in Scooby-Doo! Mystery Incorporated; it is the first series to have an officially stated romantic relationship between the two. In the first episode, Velma is trying to get Shaggy to be more intimate in their relationship, but he feels it should be kept a secret as he doesn't want to hurt Scooby's feelings. Their relationship appears as an ongoing romantic-subplot in Scooby-Doo! Mystery Incorporated. In "The Howl of the Frighthound", Shaggy breaks up with her, saying that he missed Scooby-Doo too much when he was in jail, and he's just not ready to have a girlfriend. It is unclear where things will go from here, since Velma is still angry and hurt.

In Scooby-Doo! Curse of the Lake Monster, Shaggy becomes smitten with Velma very early in the film. From that point on, he follows Velma around, slowly working up the courage to ask her out on a date. Velma is oblivious to all this, partly due to being possessed by Wanda Grubwort, until Shaggy eventually does ask her out; she reluctantly agrees. Scooby, once again jealous of this new, budding relationship, attempts to sabotage the date. Velma leaves early after getting the moonstone Shaggy was planning to give to her later. To Shaggy, it appeared that date did not go well. Later, it is revealed to the gang that Velma is possessed. Shaggy is able to save her by complimenting her and singing "By the Light of the Silvery Moon". When Velma comes to, she asks Shaggy if he meant the things he said; he confirms that he meant every word. Goaded on by Fred and Daphne, they kiss each other but conclude that there is no chemistry between them. They agree to stay friends, and Scooby gives a sigh of relief.

Other allusions to the Shaggy/Velma relationship appear in a number of Scooby-Doo series since Scooby Doo Where Are You! Velma was often paired with Shaggy when the gang looks for clues.

Some viewers of the original Scooby-Doo believed that Shaggy smoked marijuana, an urban legend making the rounds from time to time. A Newsweek interviewer asked Casey Kasem whether he had ever observed that subtext in the series; Kasem responded, "there wasn't anything like that at all" and "we never even thought of it." Kasem added that he never observed any of his colleagues making a joke about Shaggy smoking marijuana, explaining, "I guess it's because, I don't know, it was a wholesome show from beginning to end." According to Kasem, he was not aware of the drugs subtext until the Newsweek interviewer brought it up.

The makers of the Scooby-Doo film had shot several scenes parodying the drugs subtext; few of those scenes were included in the final film product. Kasem was not aware of this, as he did not track the development of the film.[1] Matthew Lillard, the actor who portrays Shaggy in the film, said that he did not believe that Shaggy consumed marijuana: "He just seems like that. He acts a little goofy and high, he's lovable and scared - and just happens to have the munchies."[2] 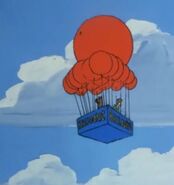 Shaggy with Scooby in Scoob!