Spook is a character on Top Cat.

Spook is the most streetwise member of Top Cat's gang, and an avid player of billiards and is quite laid-back around his friends. His fur is olive green, and he wears a torn black necktie. He frequently uses the word like in his speech, as another Hanna-Barbera character would do eight years later. While he talks like a beatnik in the show and in Top Cat and the Beverly Hills Cats, he talks like surfer dude in the theatrical films. In Jellystone!, Spook is renamed Spooky and is a woman.[1][2] Spooky rarely speaks and behaves in an odd manner and so far wears a black scarf instead of necktie. She's the alley's own personal chef. She's the most simple minded of the gang, instead of the female reimagined version of Brain. 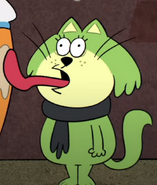