Hanna-Barbera Wiki
Register
Don't have an account?
Sign In
Advertisement
in: The Amazing Chan and the Chan Clan, Hanna-Barbera shows, CBS shows,
and 2 more

The Amazing Chan and the Chan Clan

The Amazing Chan and the Chan Clan is a series co-produced by Hanna-Barbera and Australia's Eric Porter Studios for CBS in 1972, loosely based on the character of Charlie Chan. Like many other Hanna-Barbera cartoons of the seventies, it follows a similar format to Scooby Doo Where Are You!'s about ten siblings solving cases.

In this series, the Chinese detective Charlie Chan travels around the world along with his ten children and their dog Chu Chu, which helped him solving mysteries in each episode.

They traveled in the Chan Van, created by Chan's fourth child, Alan, the mechanical genius of the family, which could be transformed into other vehicles (much like Hong Kong Phooey's Phooeymobile) with the push of a button.

The older children also had their own music group, The Chan Clan; every episode featured a song, either being played over the action or with the characters playing various instruments and performing; in any episode which features the group playing, the same animation sequence is used. Vocals for the group were provided by former Archies lead singer Ron Dante, with music supervision by Don Kirshner. 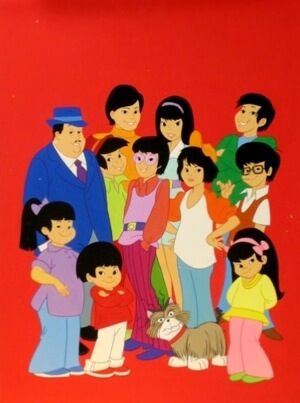 Most of the voices of the children were recast almost immediately, as it was deemed that their original thick accents would be too confusing for young viewers to understand. With the new cast in place, old episodes were re-dubbed using the new voices.