Hanna-Barbera Wiki
Register
Don't have an account?
Sign In
Advertisement
in: Hanna-Barbera shows, The Flintstones, Television series by Warner Bros. Television,
and 3 more

The topic of this page has a wiki of its own: The Flintstones Wiki.

The Flintstones is animated sitcom television series, It is Hanna-Barbera's first primetime network show, and the very first animated sitcom. It ran 166 episodes from 30 September 1960 to 1 April 1966 on ABC, it also ran on syndication after that, It's recent broadcast is now on MeTV with remastered prints of the series.

Produced by Hanna-Barbera Productions (H-B) and distributed Screen Gems (Columbia Pictures' television division), The Flintstones is about a working class Stone Age man's life with his family and his next door neighbor and best friends, The Rubbles. It was considered a parody of The Honeymooners but in a prehistoric setting.

It was the first prime-time animated series geared for adults, but kids watch it also since it's targeted at families. Not only was it the first animated sitcom, it was also the first animated television show to include a laugh track. While the show was originally co-produced and distributed by Screen Gems, Warner Bros. Television Distribution later acquired the rights to The Flintstones after parent Time Warner's purchase of Turner Broadcasting System and its properties, including H-B, it was distributed by Worldvision Enterprises in the 1980s and it was then distributed by Turner Entertainment until TimeWarner owned Turner.

Columbia Pictures Television syndicated repeats of the program until 1981, when The Program Exchange picked up syndication on Columbia's behalf. In the mid-1990s, syndication moved to Turner Program Services, shortly after Turner's acquisition of H-B, and its acquisition of rights to The Flintstones from Columbia.

The popularity of The Flintstones spawned spin-off shows, television specials and movies. A new series, by Family Guy creator Seth McFarlane, was scheduled to debut on Fox in primetime in 2013, but was discarded at the scripting stage. [1]

The Flintstones broadcast on 30 September 1960 at 8:30 p.m. EST on ABC, with its first episode, "The Swimming Pool". The first season ran for 28 episodes. The show did so well that ABC renewed it for five more seasons.

"The Pebbles and Bamm-Bamm Show" is a 30-minute Saturday morning animated spin-off of "The Flintstones" which ran for 16 episodes from 11 September 1971 to 2 September 1972 on CBS.

The show followed Pebbles Flintstone and Bamm-Bamm Rubble in their teenage years as girlfriend and boyfriend. The episodes were set mainly in the duo's activities at Bedrock High School with their friends Moonrock, Penny, Wiggy, Cindy (Pebbles' rival) and her boyfriend Fabian, Bad Luck Schleprock and a motorcycle gang called the Bronto Bunch (Bronto, Noodles, Stub and Zonk). Fred, Wilma, Barney and Betty were also featured on the show in supporting roles.

Also the series had a series of gags, educational spots, games, how-to-draw and a dance-of-the-week were featured in-between the six segments every week.

In 1982, reruns of the show were repackaged for two seasons under the title The Flintstone Funnies. Later reruns went under the titles of ”Flintstone Frolics" and “Back to Bedrock” on the cartoon channels Cartoon Network and Boomerang. 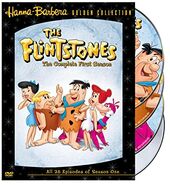