The topic of this page has a wiki of its own: Powerpuff Girls Wiki. 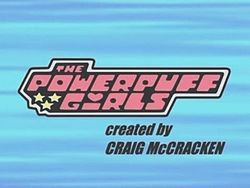 McCracken originally developed the show in 1992 as a cartoon short titled Whoopass Stew! while in his second year at CalArts. After a title change, Cartoon Network featured the first Powerpuff Girls pilots in its animation showcase program World Premiere Toons in 1995 and 1996. The series made its debut as a Cartoon Cartoon on November 18, 1998, and quickly became one of the channel's highest-rated programs. After the death of William Hanna in 2001, production was taken over by Cartoon Network Studios, as Hanna-Barbera became absorbed into Warner Bros. Animation. A total of 78 episodes were aired in addition to two shorts, a Christmas special, a feature film, and a ten-year anniversary special that aired 19 January 2009.

The show centers on Blossom, Bubbles and Buttercup, a trio of kindergarten-aged girls with superpowers, as well as their "father", the brainy scientist Professor Utonium, who all live in the fictional city of Townsville, USA. The girls are frequently called upon by the town's childlike mayor to help fight nearby criminals using their powers.

It is the final Hanna-Barbera animated TV series overall.

Retrieved from "https://hanna-barbera.fandom.com/wiki/The_Powerpuff_Girls?oldid=48552"
Community content is available under CC-BY-SA unless otherwise noted.