Touché Turtle is the star of a series of short cartoons produced as a companion to Wally Gator and Lippy the Lion & Hardy Har Har. He was voiced by Bill Thompson and later by Don Messick.

Touché and his canine sidekick, Dum Dum, match wits with villains and help innocents in distress.

His "birthday" is August 10th.

Touché Turtle wears a white hat with a red plume in it. As a fencer, he carries a standard fencing foil into battle, although his fencing foil has a noticeable dent in the tip.

Out of the pair, Touché was the brave, if not entirely competent leader who'd always rush in, shouting his catchphrase, "Touché away!" He wasn't always bright (although considerably smarter than Dum-Dum), but he's an accomplished fencer and is able to hold his own against other sword-fighting opponents. Another trait of Touché's was his mispronunciation of the word "sword"; he always pronounced the "w" instead of leaving it silent.

Touché also had a telephone in his shell, which would ring at inopportune times when people called for help. Touché would always politely excuse himself, duck into his shell and then take the call regardless of where he was at the time. 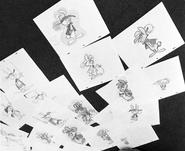 Model sheet for Touché Turtle and Dum-Dum, as drawn by Bob Singer 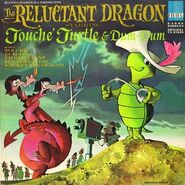