Velma Dinkley is a character in the Scooby-Doo franchise. She was the smartest member of the group, but (in the CBS days, at least) continually losing her glasses, which she despirately needs, being horribly nearsighted.

Despite differing writers and which particular incarnation of series is meant, Velma is usually portrayed as a highly intelligent and slightly tomboyish young woman with various interests ranging from highly specific sciences (which, in the "Scooby and Scrappy-Doo" series, leads her to pursue a career as a NASA research scientist) to merely being very well read on varied and sometimes obscure information, such as ancient Viking writings, as stated in The Scooby-Doo Dynomutt Hour.

It is due to this intelligent focus that Velma is usually the one to solve the mystery, sometimes with the help of Fred Jones.

In the first two series, Where Are You! and New Movies, a running gag of the series is Velma's trouble with keeping her glasses on her face (usually from being accidentally knocked off her face while being chased by the villain). Velma is usually depicted as having very limited vision without her glasses.

When Scooby is too afraid to volunteer to help with a mission, Velma often offers him a dog treat called a "Scooby Snack" as a bribe.

Velma is generally dressed in a pleated brown miniskirt, orange sweater, and glasses. When the gang splits up, Velma either goes off with Fred Jones and Daphne Blake or sometimes goes with Scooby-Doo and Norville "Shaggy" Rogers and on occasion, even by herself. Her catchphrases are: "Jinkies!", "My glasses! I can't see without my glasses!" and "You wouldn't hit someone wearing glasses, would you?"

Like all of the Scooby-Doo gang, later labelled as Mystery Incorporated members, Velma has varying personal backgrounds and histories, depending on which series is meant.

According to the original "Where Are You!" series, Velma went to the same high school as all of her Mystery Incorporated partners. In the debut episode "What a Night for a Knight", she states she attended the same high school gym class as Shaggy. This is retconned in The New Scooby-Doo Movies, where Velma is stated now to have attended and graduated from a completely separate high school from her friends (as reported in the episode "Spirited Spooked Sports Show" with comedian Tim Conway).

In the current series, unlike the other members of Mystery Inc., Velma is stated to be a native of Ohio. But on one occasion, she mentioned she's from Texas.

In Scooby-Doo! Abracadabra-Doo, Velma is described by her little sister, Madelyn, as having been "born with a mystery book in her hand".

In the 2010 series Scooby-Doo! Mystery Incorporated, Velma and Shaggy have begun dating. In this new series, Velma is pushing Shaggy to be more intimate. Shaggy, however, is hesitant due to his desire to hide the relationship from Scooby until he feels confident enough to tell Scooby. This caused some tension between Shaggy and Velma. On top of that, Velma became very controlling: telling Shaggy what to eat, what to wear, even what to say. As per advice from Daphne, she increased this behavior for a brief period; she toned it down by Shaggy's request. Eventually, Scooby became aware that they were dating. Scooby's initial reaction was exactly what Shaggy had feared: anger, jealousy, and a sense of betrayal. There appeared to be some mild animosity between Scooby and Velma due to this subject. This animosity had even elevated to insults (a stark contrast from previous incarnations of characters where Scooby adores Velma). In the end, they gave Shaggy an ultimatum: he had to choose between them. It can be assumed that Shaggy was desperate to avoid making such a decision. Ultimately, Shaggy chose Scooby and broke up with Velma, leaving her heartbroken and humiliated. Despite bitter feelings over the breakup, Velma admitted to Scooby that she still has feelings for Shaggy. It is unclear where things will go from this point. At present, Velma is not on good terms with either Shaggy or Scooby.

In Scooby-Doo! Curse of the Lake Monster, Shaggy becomes smitten with Velma very early on in the film. From that point on, he follows Velma around, slowly working up the courage to ask her out on a date. Velma is oblivious to all this (partly due to being possessed by Wanda Grubwort) until Shaggy eventually does ask her out; she reluctantly agrees. Scooby (once again jealous of this new, budding relationship) attempts to sabotage the date. Velma leaves early after getting the moonstone Shaggy was planning to give to her later. To Shaggy, it appeared that date did not go well. Later, it is revealed to the gang that Velma is possessed. Shaggy is able to save her by complimenting her and singing "By the Light of the Silvery Moon". When Velma comes to, she asks Shaggy if he meant the things he said; he confirms that he meant every word. Goaded on by Fred and Daphne, they kiss each other only to come to the conclusion that there is no chemistry between them. They agree to stay friends, and Scooby gives a sigh of relief.

Other allusions to the Shaggy/Velma relationship can be seen in a number of Scooby-Doo series since Scooby-Doo, Where are You! Examples are the fact that Velma was often paired with Shaggy when the gang looks for clues; for example:

Relatives of Velma shown during the series' run include:

Velma's little sister, voiced by Danica McKellar. She seems like 17 or 18 and she somewhat resembles her older sister in appearance and personality. Ironically, Velma herself refers to Madelyn as a nerd and doesn't seem to realize how much alike they really are. Unlike her sister Velma, Madelyn wasn't exactly sure what she wanted to do for a living and had previously attended clown college (to quote Madelyn: "Yeah, so I've done some soul-searching, Not everyone is born with a mystery book in her hand, Velma."), until she discovered a fondness for stage magic (as Madelyn put it, "I've always been fascinated by how it's done. Just as Velma loves to solve mysteries, I love to uncover the secret of magic!") and enrolls in a school for stage magicians. Madelyn has a huge crush on Shaggy. As a result of her crush on him, Shaggy refers to Madelyn as "Doe-eyed Dinkley" or by the nickname "Madds". She plays an important role in Scooby-Doo! Abracadabra-Doo, when the magic school in which she's enrolled is being terrorized by a giant griffin. Alerted to trouble at the school by Angie Dinkley [Velma & Madelyn's mom] via cell phone, Velma and the gang head to the magic school to check on Madelyn and to investigate the recent griffin sightings. After the griffin scares off most of Madelyn's teachers and classmates, Velma, Madelyn and the gang decide to stay and learn stage magic hoping it will help them in unraveling the mystery of the griffin. After Madelyn is kidnapped by the griffin and taken to its tower, Velma, Fred, Daphne, Scooby and Shaggy (dressed in a suit of armor) head to the tower to save Madelyn. They are attacked by the griffin along the way, and Shaggy and Scooby become separated from the others after the tower's center bridge breaks. Shaggy and Scooby find where Madelyn is being held and manage to rescue her before being attacked by the griffin, who grabs the "long scarf" they were going to use to escape via a nearby window. They are carried by the griffin out of the tower and manage to escape while it is flying close to the ground. Eventually, the griffin crashes and the mystery is solved, after which Madelyn becomes an apprentice magician. She is later shown giving her first on-stage performance, with Daphne as her assistant.

Velma's aunt and uncle, who live in a small town called Banning Junction, which features in a Halloween episode of What's New Scooby-Doo?

Velma's cousin, the daughter of Meg and Evan. She studies mechanical engineering in college, but unlike Velma, Marcy is fashionable, like Daphne (this, along with Marcy's interest in Fred, has made her Daphne's rival of sorts). She was born on Halloween, which over time led to her hatred of the holiday as it usually upstaged her birthday (even her parents forgot due to the holiday). She used local lore and her background in engineering to create "Mechanical Scarecrow Monsters" to terrorize the town. To throw off her cousin (and a jealous Daphne), Marcy created an alibi (security camera footage) for herself. However, Velma manages to see through her cousin's plot (possibly remembering it was her birthday), proving Daphne was right.

Velma has been voiced by several actresses. From 1969 to 1973, Nicole Jaffe voiced Velma; from 1976 to 1979, the late Pat Stevens voiced the character. From 1979 to 1980, Marla Frumkin provided her voice. Velma did not speak in the Scooby-Doo and Scrappy-Doo final episode, "The Ransom of Scooby Chief". After the character's absence from 1980 to 1983 series, Marla Frumkin reprised the role of Velma as a guest star in The New Scooby-Doo Mysteries. Velma was absent again until A Pup Named Scooby-Doo when Christina Lange voiced the role. B.J. Ward voiced Velma in a Johnny Bravo crossover episode. From the animated movie, Scooby-Doo on Zombie Island, B.J. Ward reprised her role continually as Velma though the animated movie Scooby-Doo and the Cyber Chase. Nicole Jaffe returned to voice Velma in the movies, Scooby-Doo and the Legend of the Vampire and Scooby-Doo and the Monster of Mexico. In the latest three Scooby series, What's New Scooby-Doo?, Shaggy & Scooby-Doo Get a Clue! and Scooby-Doo! Mystery Incorporated, as well as all movies made since 2004, Velma is voiced by Mindy Cohn. Kate Micucci is the current voice of Velma as of Be Cool Scooby-Doo! and all of the other Scooby-Doo shows and direct-to-dvd movies. 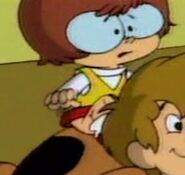 Velma in "Scoob!" alongside Fred and Daphne. 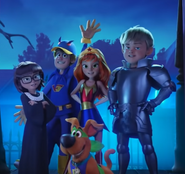