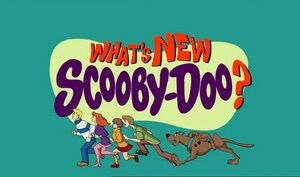 What's New Scooby-Doo? is the ninth incarnation of the Saturday morning cartoon Scooby-Doo, and a revival of the original show Scooby Doo Where Are You! It was the first time the franchise was revived in over a decade. The series was produced by Warner Bros. Animation and distributed by Warner Bros. Television. It premiered 14 September 2002. Joseph Barbera served as the show's executive producer.

After Don Messick's death, Frank Welker, the voice of Fred, took over as Scooby-Doo's voice. Grey DeLisle took over Daphne's role (having previously voiced the character in Scooby-Doo and the Cyber Chase after Mary Kay Bergman committed suicide), while former Facts of Life actress Mindy Cohn took over Velma's role, as B. J. Ward was unavailable. Casey Kasem is the only actor from the original series to reprise his role. This is the last series in which Kasem voiced Shaggy.

The new show follows the same format as Scooby Doo Where Are You!, but is reimagined as taking place in the 21st century, and features music from contemporary genres and all-new, original sound effects to replace the classic Hanna-Barbera sound effects. Even a distinctive thunderclap sound that was used frequently on older Scooby-Doo TV series was very rarely used on the show. A laugh track was only used for the Halloween special. The classic formula was also frequently parodied throughout (in a manner similar to A Pup Named Scooby-Doo), including the line "And I would've gotten away with it too, if it weren't for you meddling kids." As such, it returns to the formulaic version of humans in monster disguises, rather than the real monsters and ghosts of the prior four direct-to-video films (or the '80s versions that preceded them).

At the end credits of each episode, the copyright notice credits "Hanna-Barbera Cartoons, Inc." as the author. Also, Joseph Barbera was one of the executive producers.

The band Simple Plan is strongly connected to What's New, Scooby-Doo? They perform the theme song, and appeared as themselves in the episode "Simple Plan and the Invisible Madman". Two of their songs appeared in chase scenes: "I'd Do Anything" in the episode "It's Mean, It's Green, It's the Mystery Machine", and "You Don't Mean Anything" in "Simple Plan and the Invisible Madman". Also, they contributed to the theatrical movie Scooby-Doo 2: Monsters Unleashed.

The show features some internal continuity, as characters and places would recur from time to time. Some examples include Gibby Norton, a geek who has a crush on Velma even though she hates the sight of him, and most of the time as a villain in each episode; and the Secret Six, six prize winning puppies that would help out the gang on their cases. The Hex Girls, who first appeared in "The Witch's Ghost" movie and again in "Legend of the Vampire", were also featured in one episode. The gang also mentions places they have been in previous episodes (e.g. if they were in Paris one episode, they mention their visit at the beginning of the next episode). The episode titled "A Terrifying Round with a Menacing, Metallic Clown" established this show in continuity with A Pup Named Scooby-Doo, in which a flashback uses their kid forms from that show. Nevertheless, this series cannot have taken place in the same universe as the original series, as the characters are not 40-year-olds, and are still referred to as "kids." In addition, the Mystery Machine is determined to be only a few years old, as it was formerly owned by a kiddie pop-duo, who are now only a few years older. This rules out the original incarnation from the '70s as having taken place, essentially making this series a remake and sequel to A Pup Named Scooby-Doo.

As usual in Scooby-Doo series, the characters are Scooby-Doo, Fred Jones (both are voiced by Frank Welker), Shaggy Rogers (voiced by Casey Kasem), Daphne Blake (voiced by Grey DeLisle) and Velma Dinkley (voiced by Mindy Cohn; this is the first of the Scooby-Doo series to have Cohn and DeLisle voice Velma and Daphne, respectively).

The original characters in this series are:

Warner Home Video has released the entire series on DVD in Region 1. The series was initially released in ten volumes of four or five episodes between 2003–2006 and later re-released in season sets in 2007–2008.

In the United Kingdom all ten volumes were later compiled and released as What's New, Scooby-Doo? - The Complete Collection, sold in a container resembling the Mystery Machine, complete with motion-activated integrated sound chip which played an excerpt of the show's theme tune.