The topic of this page has a wiki of its own: Wonder Woman Wiki.

Wonder Woman (secret identity: Diana Prince) is a character in DC Comics, created by William Moulton Marston in the early 1940s. She was one of the five main heroes in the SuperFriends franchise. Her voice actresses were Shannon Farnon, Constance Cawlfield and B.J. Ward.

Outside Hanna-Barbera cartoons, Wonder Woman was featured in a live-action TV drama series in the late 1970s with Lynda Carter portraying the role, and in June 2017, a live-action film adaptation was released with Israeli actress Gal Gadot playing the role.

Wonder Woman is an Amazon superheroine and princess of Paradise Island. She is also a member of the SuperFriends.

Wonder Woman wears a bodysuit; the top half is red with a golden stylized eagle, and the bottom half is blue with white stars. She also wears metal bracelets and red boots. Her outfit was conceived long before the show by William Marsden, inventor of the lie-detector and an outspoken feminist. Wonder Woman's outfit has been reinvented for many different adaptations; the Hanna-Barbera version tries to blend the kitschy 50s patriotism of her outfit with a more Greek look while keeping most of the color scheme.

Due to Aphrodite's law, Paradise Island bestows Wonder Woman (and all other Amazons) god-like powers, as long as mortal men do not set foot on the island. Those powers include: 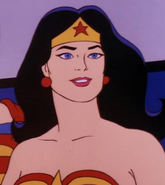 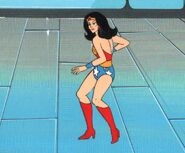 Wikipedia has an article related to:
Wonder Woman